Skip to primary navigation Skip to content Skip to footer

Elizabeth Carver and her family lived in the North East but then to escape persecution during the Salem Witch Trial they picked and ran, resettling in Boston. They were initially targeted as being a family that didn’t quite fit in but no one can quite put their finger on why. There were strange occurrences happening, like animals (cats, chickens, birds) going missing or showing up dead, uneaten by wolves or whatnot<- means not killed by natural stuff.

The Carvers were outcasts everywhere they tried to settle, from Boston to Philadelphia, even farther south, hopping from town to town. They would settle in one location and eventually the same thing would start again; animals would show up dead mysteriously (like dogs and cats, and the further south they went, larger livestock) and they would be driven out.

Now, after over a century of being on the move, constantly driven out of society by the societies around them, the Carvers were sick and tired of it. In Virginia they found a plot of land and crafted what was essentially a commune where they lived in seclusion. Who knows what manners of ideologies and horrors they developed being so separated from society.. 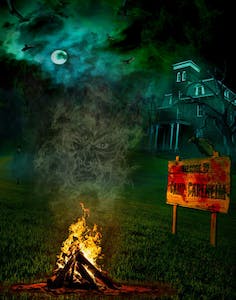 Now, after living in relative safety for a few generations, the Civil War (1861-1865) comes to their doorstep and they have no choice but to interact with the outside world once more. With soldiers marching on their lands, coming to their home and asking for aid, or even for skirmishes to occur within earshot of their beds, the Carvers knew they had to do something. One day, one of the members of the Carvers finds a hidden entrance to a massive network of underground caves, and hiding there no soldiers, no one at all really, could find them. Eventually they lived only in the caves, emerging only to gather supplies or for other, more nefarious things… Neighbors rarely saw the Carvers, and once the war settled, they found they’d disappeared completely, leading them to believe they had been casualties to the war. But strange things continued to happen in this area, but now, the Carvers as they explored this network could move in secret, even excavating their own tunnels to make a new entrance and expand their terror.

In 1872 the Paxton Manor was built on the highest point of Leesburg, prime land that had already been home to the ancestors of the Carver family. The builders had no way of knowing this, however, as they did not know that the plain wooden markers staggering this land were serving as gravestones. They removed the planks and went ahead with the project, building the great mansion on top of the graves of the elder Carvers. As a result, throughout the building process strange things would happen. Supplies would go missing, signs would disappear, several workers reported being shoved down the flight of stairs after they were built even when no one was around to witness it; most notably lightning struck the house and killed a worker while working inside the fireplace. After that, the workers could swear they felt a presence in the air, watching them work…

1922 The House- Eventually as generations wore on living in the caves, the Carvers were able to live as their old selves in the above-ground commune, but finding entrances that led to supplies were hard to find, until one day they found it… or, rather led there. In one section of their network of tunnels, one led to a crystal clear underground lake, with two other hollowed rooms beside the tunnel from water erosion. From here, they heard voices, and watched as a bucket fell from a hole in the earthy ceiling, before rising back up from a rope. They had found a tunnel that led them to the bottom of a well, which meant there had to be society nearby. After more exploring, the Carvers found the entrance into the basement of the Paxton Manor, now abandoned. Seeing the opportunity to return to the easy access of the surface, they explore closely and to their delight find a set of secret passageways that lead throughout the house. They operate out of there for a time, still living largely out of the caves but wanting to enjoy the luxury of the mansion and of the outside world even if it was abandoned. But a house in this position does not remain abandoned for long, and eventually someone entered looking to make it their home. The Carvers there hid in the passageways, and later on together came to the decision that they didn’t want to relinquish the opportunity the house provided. If done carefully, they could continue to live in the house by using those secret passageways, allowing them to coexist with any tenant.

It worked for many generations until many many decades later they once again had the house to themselves, and at that point in their family history they had no intention of sharing again.

From the house the Carvers would operate to find supplies, but during the Depression they were getting to be harder and harder to find. People everywhere were starving, but the Carvers weren’t like everyone else when they get hungry. Now, they’re running out of nearby animals to kill and eat, and instead their eyes settle on the neighbors who walk the streets. It was here that the Carvers as a family developed a taste for human flesh, centuries building up to this time when they would hunt the ultimate forbidden prey. They would use their underground network to hide the bodies of their victims, tossing their bones into an underground flowing river that carried them to the Potomac. Away from the family, so evidence could never be pinned to them, even though no one knew they were there. Ancient familial habits die hard.

The grand manor is showing decades of time in the worn wood, inches of dust pile on the stairwells and cobwebs are the newest decoration that adorns the halls, but do not mistake it for being abandoned. Now, the Carvers claim the entirety of the manor. The Carvers’ taste for human flesh has only grown with the generations, luring more and more victims to sate their hunger, both literal and something far darker and twisted. Local folklore says that there are scientific explanations for the strange happenings around the manor; people and animals alike going missing entirely, never to be seen again, strange noises coming from the manor at night, whether the Carvers dwell within or not.